As an indispensable important component in mechanical p […]

As an indispensable important component in mechanical products, bearings play an important role in supporting the rotating shaft. According to the different frictional properties of bearings, bearings are divided into rolling friction bearings (referred to as rolling bearings) and sliding friction bearings (referred to as sliding bearings). The two types of bearings have their own characteristics in structure and their advantages and disadvantages in performance. When selecting, they should be considered in combination with the actual situation.

Comparison of structure and movement

The most obvious difference between rolling bearings and sliding bearings is whether there are rolling elements.

2) The sliding bearing has no rolling elements and supports the rotating shaft with a smooth surface, so the contact part is a surface.

Under normal working conditions, the friction coefficient of rolling bearings is lower than that of sliding bearings, and the value is relatively stable. While sliding

Bearing lubrication is easily affected by external factors such as speed and vibration, and the friction coefficient varies widely.

Due to the influence of material pitting corrosion and fatigue, rolling bearings are generally designed for 5 to 10 years, or replaced during overhaul. Bearing bushes with incomplete liquid lubricated bearings are badly worn and need to be replaced regularly. The life of fully liquid lubricated bearings is theoretically infinite. In fact, due to stress cycling, especially dynamic pressure sliding bearings, the bearing materials may suffer fatigue damage.

Due to the small radial clearance of rolling bearings, the rotation accuracy is generally higher. Incomplete liquid lubricated bearings are in the state of boundary lubrication or mixed lubrication, the operation is unstable, and the wear is serious, and the accuracy is low. Due to the presence of oil film, the fully liquid lubricated bearing has a high vibration damping and high accuracy. The rotating precision of hydrostatic sliding bearing is higher.

Comparison in other areas

Rolling bearings use oil, grease or solid lubricants, the amount is very small, the amount is large at high speed, the cleanliness of the oil requires high, so the seal is required, but the bearing is easy to replace, and generally does not need to repair the journal. For sliding bearings, in addition to incomplete liquid lubricated bearings, the lubricant is generally liquid or gas, the amount is large, the cleanliness of the oil is also very high, the bearing bush needs to be replaced frequently, and sometimes the journal is repaired. 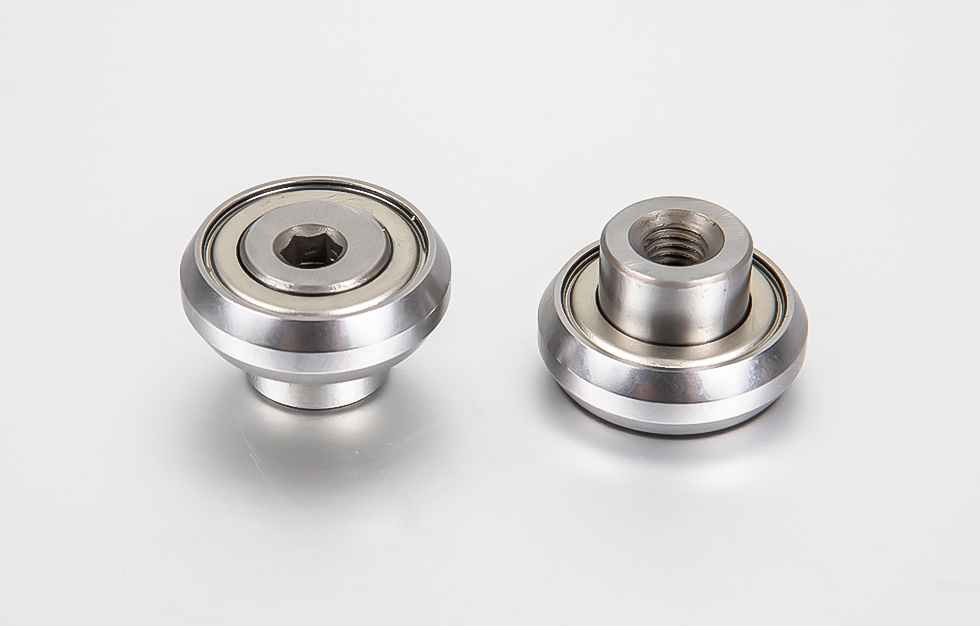 Due to the complex and diverse actual working conditions, there is no uniform standard for the selection of rolling bearings and sliding bearings. Rolling bearings have low friction coefficient, low starting resistance, sensitivity, high efficiency, and have been standardized. They have excellent interchangeability and versatility. They are easy to use, lubricate, and maintain. They are generally given priority in selection, so they are used in general machines. widely used. The sliding bearing itself has some unique advantages. It is generally used in occasions where it is not possible, inconvenient, or has no advantage to use rolling bearings, such as the following occasions:

Radial space size is limited, or split installation is required

Rolling bearings have an inner ring, an outer ring, rolling elements and cages in structure, and have a large radial size, so they are limited in application. When the radial size requirements are strict, needle roller bearings can be selected, and when necessary, sliding bearings are required. For the inconvenience of the bearing, or the inability to install from the axial direction, and the parts that must be split and installed, it is necessary to choose split-type sliding bearings.

Rolling bearings, whether they are ball bearings or roller bearings, are prone to heat and fatigue under heavy loads. Therefore, when the load is large, slide bearings are mostly used, such as steel rolling mills, steam turbines, aviation engine accessories, and mining machinery.

For a kind of machinery and equipment, the application of rolling bearings and sliding bearings has its own advantages and disadvantages, and it should be selected reasonably according to the actual situation of the project. In the past, large and medium-sized crushers generally used plain bearings cast with babbitt alloy, because they can bear larger impact loads, and are more wear-resistant and stable. The small jaw crusher uses rolling bearings, which has high transmission efficiency, more sensitive and convenient maintenance. With the improvement of the technical level of rolling bearing manufacturing, rolling bearings are currently mostly used for large jaw breaks.

0
Views: 244
PREV: Industrial robot bearing classification and industry development analysis.
NEXT: What are the mechanical incentives for motor vibration caused by bearings and gears